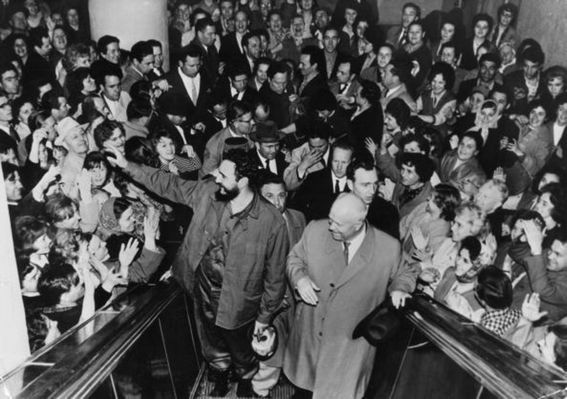 Russian President Vladimir Putin was almost right when he said on Saturday that the memory of Fidel Castro, Cuba's revolutionary leader who died on Friday night, would "always remain in the hearts of Russian citizens." Thanks to my Soviet childhood and young adulthood, I'll never forget Fidel, but my heart is not where I'll store those memories.

To Soviet Young Pioneers, Cuba was a romantic legend, an example of how a tiny island can stand up to American imperialism. Young Pioneer units were named after Jose Marti and Che Guevara. Those of us who learned Spanish studied it as the language spoken in Cuba. It was the country in whose honor Iosif Kobzon, the Soviet Union's official crooner, glued on a fake Fidel-like beard, strapped on a fake submachine gun and let it loose:

Even after all these years, the sounds of the best Cuban music I've heard in Havana and in Florida haven't quite drowned out Kobzon's "Cuba, My Love."

By the time I was out of high school, however, Cuba was a burden. Moscow stores were filled with green Cuban oranges that were next to impossible to peel and had so many pits they all but rattled. It was next to impossible to get decent cigarettes, but every kiosk had several varieties of Cuban ones, with famous names like Montecristo and H. Upmann, filled with black cigar tobacco so strong one choked when trying to smoke them. The "Island of Freedom" was supposed to pay the Soviet Union back in kind for its oil, machinery and pretty much everything else Cuba couldn't buy closer to home because of the U.S. embargo. But it had little to sell or barter, so we got the evergreen oranges and the murderous cigarettes while Cuba ran up a $35 billion debt to the USSR. I remember singing, to the tune of "Cuba, My Love":

Cuba, give back our bread,
Cuba, take back your sugar.
We're sick and tired of your furry Fidel,
Cuba, get the hell out of here.

In 1989, Cuba imported $8.1 billion worth of Soviet goods. By 1994, that shrank to $500 million. Boris Yeltsin's post-Soviet government wanted to be friends with the U.S., and that meant ditching Fidel. He was no longer a friend: When Russia turned capitalist, he didn't get the hint. In 1995, Moscow reggae singer Gerbert Morales, half-Cuban and one of the new breed of musicians we listened to, sang of Cuba as a land of wasted opportunity:

Bearded Fidel has cheated everyone:
He put a sun up in the sky, but it won't roll.

Only during Yeltsin's second presidential term at the end of the 1990s, when the Moscow establishment realized the West was treating it as a bunch of Cold War losers and the brief love affair with the West ended, did Russia attempt to patch things up with Castro -- but it was too late. Cuba, forcibly weaned off Russian aid, was forced to open itself in a limited way to Western business. By the time Foreign Minister Yevgeny Primakov, a Soviet functionary with fond memories of Cuba as Russia's westernmost military base, flew to Havana to try a reset, Cuba had 260 joint ventures with foreign companies in 30 different industries. Only two of the joint ventures were with Russian partners.

Cuba's tourist industry was happy to see Russian visitors, but they no longer got special treatment. When I visited in 2007, I often heard of the "betrayal" of Cuba by my country; my euros were welcome, however. In my rented car, I drove on empty roads: Gas was only sold for "hard" pesos, for which the euros could be traded; but salaries were paid in "soft" pesos, a worthless currency that could be used to buy cheap rum and other meager staples. Dozens of people crowded under bridges to keep out of the searing sun, hoping to hitch a ride. They could stand there for days, there were so few opportunities to do it. Talking to people out of earshot, I expected a variation on "We're sick and tired of your furry Fidel," and people were willing to voice their unhappiness with the way they lived. But Castro was still respected -- mainly for being idealistic rather than corrupt and self-serving.

Perhaps that's how he was; that would explain why the Russian-Cuban relationship never quite recovered even when Putin tried to buy his way back onto the island. In 2014, ahead of a visit to Cuba, Putin authorized the write-off of $30 billion of Cuban debt, perhaps hoping to restore the Russian military base at Lourdes, closed in 2002 because it was too costly to maintain. A Russian deputy defense minister talked about reopening the base as recently as last month, but now that Fidel Castro is dead, it's less likely than ever before -- unless the U.S. under President Donald Trump rolls back Barack Obama's efforts to weaken the embargo.

Early this year, during the U.S. presidential primary campaign, I found myself in the Miami suburb of Hialeah, the most Cuban of all U.S. cities. An apparition made me hit the brakes so that the driver behind me swerved to avoid a collision: a Soviet-made Lada was parked by the roadside. The clunkers are a common sight in Cuba, and the stately '50s U.S. sedans that ferry tourists around Havana are basically Ladas inside. In Florida, though, no one drives a Lada -- except, as I soon found out, Fabian Zakharov, a Russian-Cuban entrepreneur with a thriving business selling Lada parts to Cuba.

He'd tried to make it in Castro's Cuba and in Putin's Russia but found the bureaucracy too restrictive, so he ended up in Hialeah. He was plotting to move his business to Cuba once the U.S. embargo ended. Now that Fidel is dead, I think he's closer to carrying out his plan.

For years, Fidel Castro was too feeble to be the energetic dictator who once inspired Soviet crooners. He was, however, a symbol of honest stubbornness. People who hated what he stood for and what he'd done to his heavenly island could still respect the steadfastness of his beliefs. His mistakes, and the crimes he committed to perpetuate them, weren't dictated by greed. Now, it will take time to correct the mistakes and atone for the crimes -- or, more likely, to mask and forget them. But greed -- as honest as Fidel's Communist beliefs -- will take over faster now.

The fake sun Fidel once glued onto the sky has come unstuck.